It’s that time again. Time for me to get excited for Dragon Con! And prep new costumes.

I’ll definitely be going as Starbuck from Battlestar Galactica again, seeing as a few major characters will be joining that weren’t there last year. Helo, Dualla, Adama. Oh yeah.

I have to check out if there are any Stargate actors, as I have that costume done as well. When I go to the stargate convention, two weekends before dragon con, I’ll go as Samantha Carter of course.

Now on to the new costumes. I had an amazing find at goodwill. I went in looking for anything that I could turn into steampunk and things I could use for Lost Girl characters. Now, what I found wasn’t a perfect match but I came out real good! A prom dress for the underneath of a steampunk dress, another skirt to be the over part of the steampunk dress, a “leather” jacket for Bo of Lost Girl, pants/skirt/belts for Kenzie of Lost girl. About 7 items for $21. Woot woot!

Here’s a picture of me trying on my Bo outfit next to an actual picture of “Bo” from Lost Girl. I’ll have to try some thick eyeliner like her, even though me and makeup don’t get along. 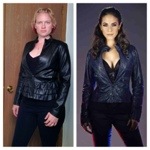 Not that she’s overly recognizable, but standing in line for a panel specific to Lost Girl I’m sure everyone will know who I’m supposed to be.

My Kenzie outfit is very unlike me. I feel uncomfortable out of my element, but I think she will be fun to sort of role play as. Time to push my boundaries and have some fun! No feeling embarrassed. I’ll put it together and try to take a good picture. Poor lighting in my apartment is frustrating.

I’ll be heading to some stores this afternoon to look for pieces parts to complete my steampunk outfit. Maybe a hat or parasol and embellishments. I already have an undershirt, kind of medieval, which I’ll wear under a corset. The corset I’ve been shopping online for and I think I’ve found the one I want, I just need to determine what size. Then I might buy goggles and wrist bands online. Fun times!

More pictures to come as I build these outfits. Eventually I need a sewing machine….