Before you say anything, yes, I know I missed the holiday post. I could back-date my entry and it would look like I posted on the 4th of July but I’m going to be honest with you so…. Happy 5th of July! I hope you had a great time yesterday.

My husband and I watched our city’s parade in the morning. We then went to a festival downtown and had fair-like food (me, a pork kabob, rice, and salad from an Egyptian venue), listened to music, and looked at vendor booths. I’m a “window” shopper, look but don’t buy. The weather was much cooler than last year where I nearly passed out walking to the event and also was a grumpy McGrumperson as a result.

We walked back and spent some time in doors. I worked on learning how to use InDesign as I wanted to make a preview of my story The Jacobian for friends to read. I also worked on a letter of recommendation for a friend and as I am a perfectionist that letter probably took longer than it should have. My husband played Starcraft II with me, teaching me how to play as I was never a Starcraft fan. First impression = like Warcraft but with more thingies to complicate it. I’m very technical today.

I’m so excited to tell you that I’ve been in the creative mood! I wrote a poem a few days ago – my first one in over a year- and I’ve started writing on the story The Jacobian again. I took it from 29 to 32 pages today alone. That’s crazy progress when I was averaging one page in two months. Go me! I’m setting lofty goals and hoping to have 200 Microsoft Word pages done by the end of the year. Watch my progress bar on the right side of the page (under my twitter feed). And wish me luck!

I worked on writing some as well. After spending time in doors, my husband and I made the walk back out to the downtown festivities and watched the fireworks. They were spectacular. I’ll post some pictures and video for you.

Here’s some 4th of July media. Courtesy of my iPhone. 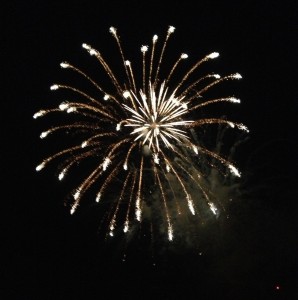 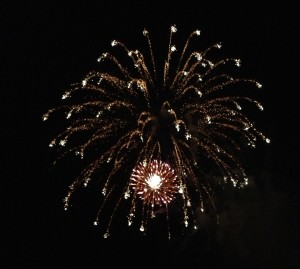